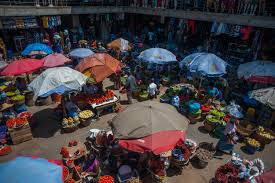 Whenever you hear the words customer experience what exactly comes to your mind? Do you think it’s something solely left for large organizations?  Or do you think it’s about having the right product? What about you, the small business owner?  Does it concern you at all? Let’s find out from this real life occurrence.

Whilst shopping in the open market last weekend, I noticed that one or two hair stylists were beckoning on me perhaps on sighting my natural hair. I decided to pay attention to one of the ladies who seemed relentless. It was going to be a first time as I had never really tried the stylists in that particular area. I only admire their work whenever I happened to walk past the hair aisle.

We agreed on time for the next day which was a Sunday, since I wasn’t prepared for that day. I was excited because I knew that apart from the braids, spending time in such a busy place could trigger some ideas. You would be amazed at what writing can make you do intentionally.

The next day, I arrived on time but on getting to where I met her the previous day, she was absent. I called her numbers and she responded that she was just five minutes away.

I didn’t realise that I had been waiting for about fifteen minutes till I noticed that I was being hounded by other stylists who wanted me to patronise them . I decided to call her again and that was when I checked the time.

She pleaded that she was already near and kept urging me not to approach another stylists.   I was quite tempted to allow someone else but I just felt like allowing her since she already pleaded.

How surprised I was when she arrived exactly thirty-five minutes later only to announce that she wanted to eat first.

Finally, we started shortly after noon which was already an hour after I arrived. Around 3.p.m which was three hours later, I checked the mirror and discovered that we hadn’t covered much . I tried to speed up things by asking “Is it possible we finish by 4.p.m?”

The side look and the sharp response that followed my question was enough to leave me in shock. Who sent me? I asked myself.

After a while I decided to spice things up by calling for chilled drinks. Perhaps the hot weather wasn’t helping. The woman selling drinks brought the drinks and handed one to her. But to my surprise she scolded the woman for bringing drinks that was too cold. I was too amazed to speak as I sipped my drink quietly. I can’t even remember if she said thank you or not.

Later on I tried to touch my hair to see what was left since I couldn’t talk nor ask questions. The force with which she shoved my hands away from my own hair under the excuse of my scattering the parts she had mapped out took me aback. The force reminded me of those times I sauntered into the kitchen trying to take a piece of fried chicken that mum was frying and unfortunate to get a loud bang on the head instead. I felt like someone had just reduced me to an elementary school girl. On top my hair and my money.

The final straw was when we had to move locations twice because of rain. The fact that it didn’t even come cheap was what got me wondering why this kind of experience? Thus by the time we were done two hours later and she asked me when next I would be back, all I could afford was a cold smile.

A smile which grew wider as I walked out of the gates scrolling through my phone contacts and pausing briefly before I tapped boom! An action which ridded  me and my phone of one more ill-mannered entrepreneur who preferred to take customers for granted. Good riddance I said to myself lifting my face briefly as the warm evening breeze caressed my face.